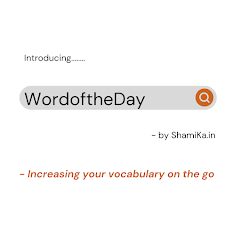 #wordoftheday is a Shamika.in spin-off where I post about new words & terms I come across either through articles, forwards or just simply the dictionary.

The Backstory - I studied in ICSE board right up till 10th standard. Which means I was done studying the unabridged version of Huckleberry Finn by the time I was in 6th Grade and The Merchant of Venice & As You Like It by Shakespeare by the time I was 15. Living in the 21st Century and studying something that was written in the 1600s. Not that I was complaining; Shakespeare was a pleasure to read (and also a HUGE flex when I went to college - as I later realized). Two days ago
when I was casually browsing the internet for topics to write on, I came across a link which had about 300 difficult words that are asked for SATs and thought I'd give it a try. Turns out I knew quite a few but not as much as my dad. He was literally shooting answers faster than an AK47 to words he had learnt more than three decades ago. So here I was, a 22 year old, able to decode something written in the 17th century but unable to decipher meanings to tough 21st century words.The Idea is simple - To increase my vocabulary and learn more words with each passing day; not only on my own, but with you too. You'll be surprised to see that there are a ton of words pre-associated to feelings, emotions, situations or people for that matter that you never knew about. Here's hoping that the next time you're part of a conversation, you don't have to spend 2 minutes trying to explain something that the English language already has a word for!
Tap here to follow on Instagram for regular updates.