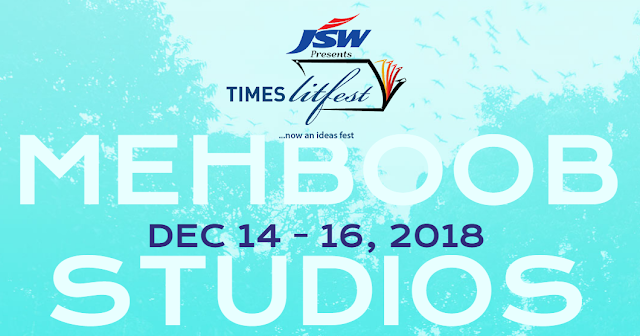 16th December 2018. What was supposed to be a lazy Sunday morning turned out to be the best and most fulfilling Sunday I had had in weeks. Up until the night before, my plans included going for a Birding Session with my college's Nature Club to Aarey Colony, Goregaon at 5:30 in the morning. For reasons best left unsaid, I decided to sleep in. But what are fathers for then? My dad told me that just because I had woken up late, it didn't mean that I wouldn't be doing anything the whole day. Out came the Times of India where he found out that 16th December was the last day of Times Lit Fest. Within the next 2 hours, I was on a train to Bandra with the Fest Schedule in my hand, circling out the events I wanted to attend. 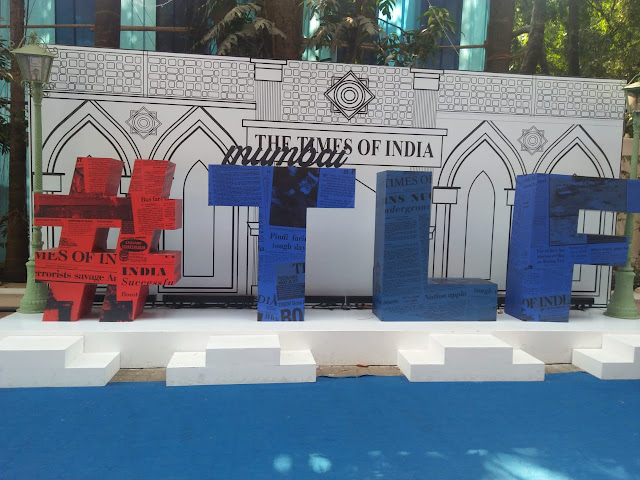 The theme was WATER. So everything was in shades of blue. Which made me feel as if I had just walked onto the sets of Aquaman. Minus Jason Momoa and Amber Heard.

Mehboob Studio's halls were named after all the Sponsors for their event. So as you walked in, on the right you had Aditya Birla Lawns where all the musical performances were held, on the left were JSW hall, TIM Delhi Airport hall, LIVA hall and Workshop hall. In the quadrangle, there were food stalls with a common eating area and a small bookstore. Volunteers were in abundance and were there whenever you needed them.

The best part of the scheduling was that,


you could walk in and leave anytime from the talks in the halls. If you felt the topic didn't interest you enough, you could always leave and be rest assured that there would be a different topic being discussed by a totally different speaker in the next hall because everything was going on simultaneously. Between 2 talks, there was a gap of about 15 minutes during which people would normally go to the bookstore and stand in line for the fan signing event. Me? I went to the lawns and sat for whatever performance was going on. 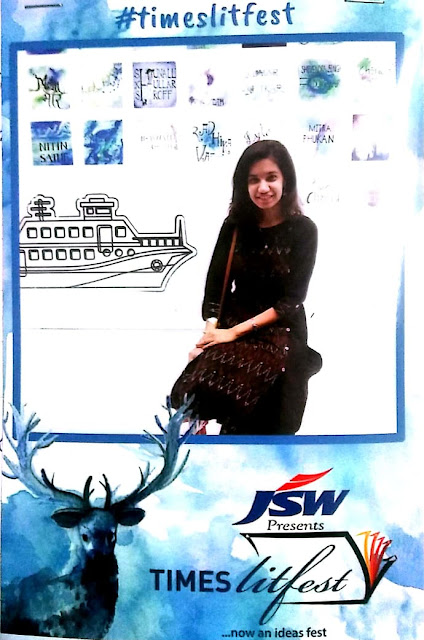 They had some really fun and nice ways of promoting their companies. Like LIVA fashion was promoting sustainable fashion. All you had to do was stand in front of the machine, listen to what it says, smile in front of the camera and click! An A4 size picture of you pops out. There was also this instant photo thing, where you click a picture of yourself anywhere on the grounds, #timeslitfest on Instagram and within 30 secs, they print the photo for you. Another thing was distributing random books when you would tag them on Facebook. Those got over pretty quickly. I mean, who's NOT there on FB nowadays ?

I talk shows that I was interested in were all at JSW Hall. I attended the:

In between I also attended musical performances by:
1) Goutam Baul
2) Musical Reading by Priyanka Sethia and Yuki Ellais
3) Weaving Melody from Water ( Milind Talukdar demonstrates the lyricism of Jal Tarang)

The best part of these fests is that you're never actually alone even though no one's accompanying you. Like it happened in my case. I left on such short notice that I landed up at Mehboob Studios alone. 7 hours later, I managed to make everyone jealous. The people out there were very open and approachable. Primarily because even they had come alone. I guess that's better. Atleast you don't have anyone pulling you out of shows you want to sit for.

This time it was thanks to me waking up late and my dad insisting on me not staying home on a Sunday that I made it to the Times Lit Fest, but next time I'm going to make it a point to go and attend all 3 days of the fest. And hopefully get some more people interested as well.