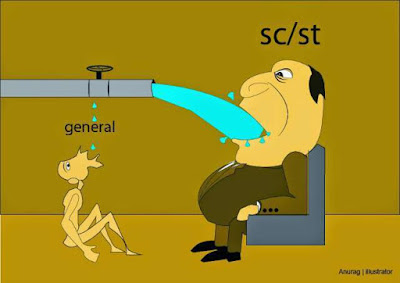 The Scheduled Castes and Tribes (Prevention of Atrocities) Act, 1989 is an Act of the Parliament of India enacted to prevent atrocities against scheduled castes and scheduled tribes.
Article 17 of Indian Constitution seeks to abolish 'untouchability' and to forbid all such practices. It is basically a "statement of principle" that needs to be made operational with the objective to remove humiliation and harassments meted to the Dalits and to ensure their fundamental and socio-economic, political, and cultural rights.

USE OF FORCE AGAINST DALITS
Sections 3 (1) (i) to 3 (1) (iii) specifies the offences of atrocities by use of force. If a member of upper class uses force against the member of a Scheduled Caste or a Scheduled Tribe like committing acts with intent to cause injury, insult or annoyance to any member of a SC/ST by dumping excreta, waste matter, corpse or any other offensive substance in his premises or commits similar acts which are derogatory to human dignity, shall be liable for minimum mandatory punishment of six months which may be extend to five years and with fine.


Hindu society is divided into many castes and more than 400 castes are termed as scheduled castes and scheduled tribe and are regarded as untouchables. The preamble of the constitution of India talks about equality but despite that there is no equality among the citizens of India, but the so-called citizens of India treat the lower caste people more ruthlessly than the animals.  Hence, the need for the SC/ST.
Moral of the story: No matter how much we have developed as a country till now since independence, the thinking of the society has not yet changed. No wonder India is still stuck at the "developing stage" for the past 60+ years. And to think we keep blaming the government for all our problems. Someone has rightly said, "Take a look at yourself in the mirror before criticizing someone else".
SOURCE - https://blog.ipleaders.in/prevention-atrocities/