Showing posts from February, 2018
Show All

RIP Humanity - Syria is in a bad state. Here's the damage. And more. 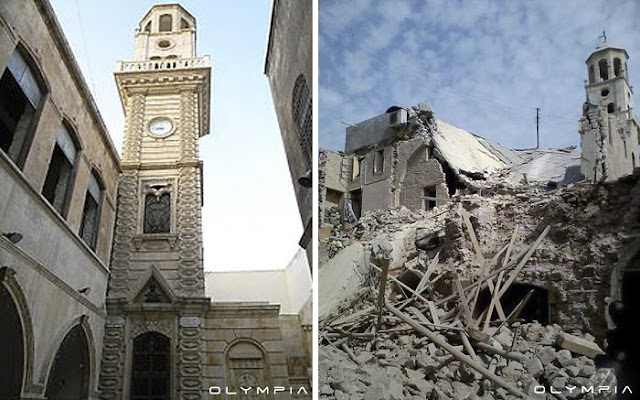 A country rich in cultural heritage. Beautifully planned cities. Followed by years of bombings. Sad to see what a state it has become. Sometimes one feels what is the use of becoming a "developed" country if there are others who only want to dominate you. Totally Ravaged. RIP Humanity.
Post a Comment
Read more

- February 28, 2018
If you're a Holi (Indian festival of colours) lover, you won't be able to believe what you're going to read. Call it fear, superstition or nonsense, but this village in Jharkhand has not celebrated Holi for over a 100 years for fear of their king's ghost haunting them (they even have evidence and past experiences to support their decision). Totally unimaginable for something like this to happen in a country like India (in a country where the first thing people check when the new year starts is how many bank holidays are there in the coming year!). Being a Bombay girl, I find it funny and call it ridiculous. But for the people staying there, it's a living nightmare. I'm not entirely sure if ghosts exists or not (stupid horror movies have corrupted my mind. No wonder they say that the TV is an idiot box), but for the people of Durgapur, Jharkhand, they have no choice but to believe this story if they don't want misfortune to befall them. So here's th
Post a Comment
Read more

3 years away from family (with only 2 short visits home during an entire year).Their life is tough. And this is just the beginning.
Post a Comment
Read more

National Defence Academy : Part I - Think you can handle it ?

Off late (and once before as well) I've started having a lot of respect for anyone in the defence. This is one training video which shows just how much it takes to survive in the Indian Defence.
Post a Comment
Read more 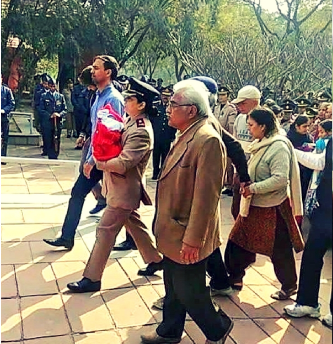 M ajor Kumud Dogra, donning her crisp uniform, marches forward. This is perhaps of one of the saddest moments of her life – as she pays homage to her martyred husband, IAF pilot Wing Commander Dushyant Vats who was killed in a microlight helicopter crash in Assam. But she isn’t alone. Bundled in her arms is her 5-day baby, one who never had the chance to see her father alive. This picture of Major Kumud Dogra, walking to her husband’s funeral with her baby in her arms. It is difficult to imagine how one can have the courage to shield themselves and not break down in the final moments of losing their dear ones. The courage, resilience and indomitable spirit of the army woman, while bidding her husband goodbye, has inspired many. h ttps://www.thebetterindia.com/132396/army-martyr-husband-newborn/
Post a Comment
Read more

Who is a PRESSTITUTE ?

- February 27, 2018
Presstitute  means journalist or media agency who give biased and predetermined views in favor of or against the government and corporations, thus neglecting their fundamental duty of reporting news impartially. It is a portmanteau of press and prostitute. He/She can also be a member of the press who has qualities of a prostitute (willingness to sell his/her body for monetary gains). Shocked that such a word exists ? Don't be. If there are people, there can very well be words to describe them.
Post a Comment
Read more 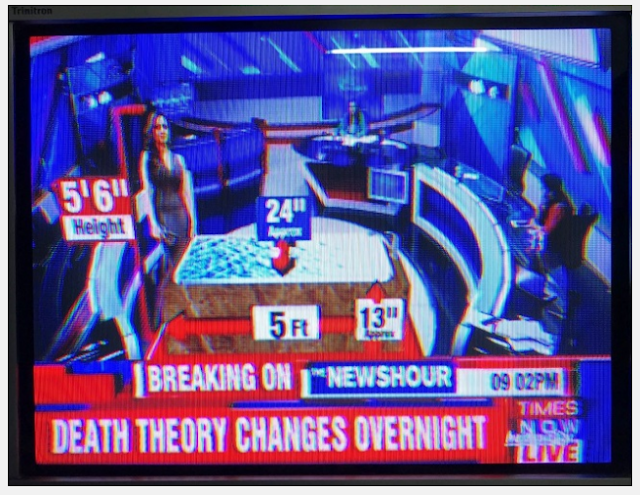 Yes you got that right. Since the day legendary Indian actress Sridevi died after a cardiac arrest in Dubai, the entire nation has gone into mourning and our "extremely hardworking" media into a frenzy. Journalism has reached a new low.  The first day the news came out, every single article read about what a talented actress, doting mother, loving wife she was. But that was just Day 1. By the next morning, Whatsapp groups (atleast mine) started sharing forwards on how her death was caused by all the numerous Botox shots she used to take, weight loss treatments she underwent, how she was just an arm candy for her husband and how she was forced to look like a 20 year old even at the age of 50 etc etc etc. I have no idea how much of that is true.  Come Day 3 and the entire media turned into desi Sherlock Holmes. Ever since the Dubai police revealed that Sridevi died of "accidental drowning", reputed news channels have gone to the extent of coming up with their ow
Post a Comment
Read more 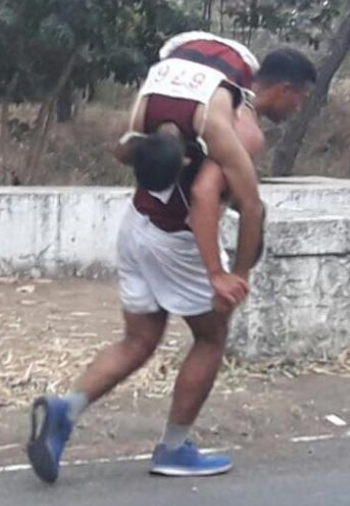 A top army general flew from Ambala to Pune earlier this week to acknowledge the spirit of a cadet who carried his unconscious buddy on his back for 2.5 km to complete a cross-country run at the National Defence Academy (NDA) in Khadakwasla. Lieutenant General Alok Kler, a strike corps commander, also presented his Ray Ban aviator sunglasses to the cadet. The 13.8-km cross-country run is an important part of the curriculum at the academy and the performance of cadets in the activity contributes significantly to the overall standing of their squadrons.
Post a Comment
Read more

The sudden death of actress Sridevi has left the country shocked and grieving. Just 54, Sridevi died after suffering a cardiac arrest on Saturday in Dubai where she was attending the wedding of actor Mohit Marwah, a nephew of the Kapoor family.  Sridevi, respected by her colleagues as a fine actor with a gift for comedy, is considered the first female superstar of Indian cinema and leaves behind her a rich legacy of films in Tamil, Telugu, Malayalam and Hindi.  Life is so unpredictable. You don't even know if the person standing in front of you will be with you the next moment or not. No wonder they say, never do anything you will regret or jo bolna hai achcha bolo nhi toh chup raho.
Post a Comment
Read more 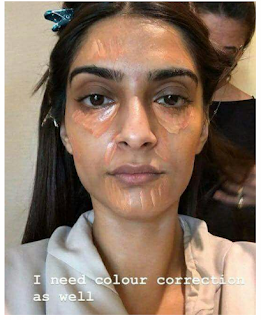 I don't follow Sonam Kapoor much. But recently i read one of her posts and couldn't help but repost it on my blog as well. Here, have a dekho.  Good read from one of Sonam Kapoor's articles... " So, for every teen girl leaning into her bedroom mirror, wondering why she doesn’t look like a celebrity: Please know that nobody wakes up like this. Not me. Not any other actress. (Not even Beyoncé. I swear.) Here’s the real deal: Before each public appearance, I spend 90 minutes in a makeup chair. Three to six people work on my hair and makeup, while a professional touches up my nails. My eyebrows are tweezed and threaded every week. There’s concealer on parts of my body that I could never have predicted would need concealing.
1 comment
Read more

I personally don't like Snapchat's newest update. Just when I started making streaks with everyone, Snapchat came and decided to get a makeover. The entire app has become annoying now. I'm just waiting for a reverse update. Come to think of it, I like my apps to be the way they are. Whatsapp's emojis also freak me out at times. They seem too real. Instagram changed it's logo and I went from Whaaaaaat ? to What ? But no harm done there. But there is one person who has the power (maybe unknowingly) to change Snapchat's share prices. Reality TV star Kylie Jenner wiped $1.3bn (£1bn) off Snap's stock market value after tweeting that she no longer used its Snapchat messaging app.
Post a Comment
Read more

Side Effects of Overnight fame....!

When the media (and Ramdev Baba) can't seem to get enough of you!
Post a Comment
Read more

With examples of bank defaulters like Vijay Mallya, absconding from the country, still fresh in the minds of Indians, China has taken another strict step towards penalising the debtors and defaulters. In an unprecedented crackdown, China’s Supreme People’s Court has blacklisted 6.73 million bank defaulters and restricted them from travelling by plane, applying for loans & credit cards or getting promoted.  As reported by Global Times, till date, the Chinese government had barred 6.15 million people from buying plane ticket s and 2.22 million from travelling by high-speed train. I wonder when India will be like this !!! To read more: http://www.financialexpress.com/world-news/china-launches-crackdown-against-7-mn-bank-defaulters-shows-india-how-to-deal-with-debtors/558021/
Post a Comment
Read more

It's been almost 4 days since India found it's second Vijay Mallya, yet not many of us have understood the answers to the entire How - What - When - Why series of questions. I went through a couple of sites, Whatsapp messages and realized that more or less the story remained the same. Here is one such site which explains the entire scam beautifully and in detail. An excerpt from the article: The Scam, and How It Stands Punjab National Bank announced a big fraud of Rs. 11,000 cr.+ in a surprise letter to the stock exchanges.And then, it apparently shot off a message to a bunch of banks, blaming a now retired employee for raising fraudulent Letters of Undertaking for over six years. And blaming the people who received the funds, companies owned by a jeweller named Nirav Modi, and in another case, those owned by Mehul Choksi, such as the publicly listed Gitanjali Gems. Nirav Modi is Choksi’s nephew. (As trivia: Nirav Modi’s brother, Nishal, is married to Ishita Salgaokar,
1 comment
Read more 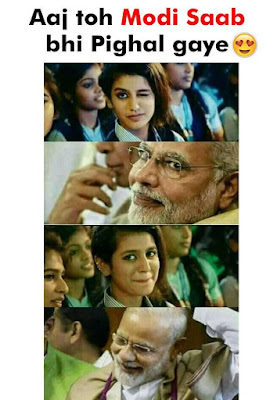 Priya Prakash Varrier. And her half wink. That's about it. One wink and this actress from Kerala became a national sensation. 1:33 to 1:53.  With a screen space of less than 20 seconds  in a 3 minute video, Priya Prakash managed to steal the hearts of lakhs of people. Thank god no one had their exams around that time! Otherwise we would have lost record of the number of ATKTs students would have got.
Post a Comment
Read more