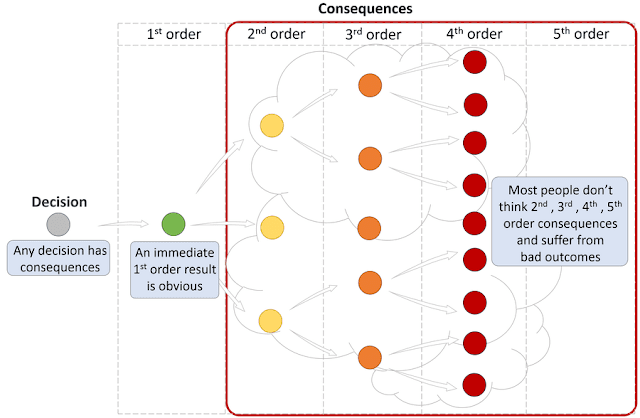 Very often it so happens that you encounter a problem and arrive at a solution which appears to be the most logical one - an outcome of the First Order Thinking.

Every action has a consequence. And every consequence has another consequence. The premise of Second Order Thinking is that every solution, if not evaluated thoroughly, will have a bigger consequence which has worse side effects than the original one, thus possessing the potential to mess up the ecosystem (imagine being asked to rework and made additions to a code which already works perfectly fine. What you will end up doing may not only give you the desired outcome but may also make more undesired changes to the output). Simply put, the prevention of this kind of a "screw up" is what calls for Second Order Thinking.

Let me give you two examples which lacked Second Order Thinking:

One interesting fact about Second Order Thinking is that there's no fixed timeline of seeing effects of the solution consequence. The consequences are visible after, weeks, months or even years.For the first example, the consequence was pretty fast - within a span of 3 weeks it hit the news. But for the second, it took ages - decades to have any noticeable impact.

So how do you go about Second Order Thinking ?

You have a solution to a problem. List down it's consequences one by one. Next, ask yourself the question - And then what ? What will be the effect of this solution's outcome on other things? What will be the repercussions ? How will it affect you? How will you deal with that ? What's plan B ? So on and so forth until you arrive at a satisfactory answer.

Moral of the post:  The most obvious solution is often the one where everyone is in agreement with. For this very reason, it may not be the best as no one had spent time thinking. That's always the easiest way out isn't it? Calls for very less thinking on your part. The first solution can be considered as the best possible course of action only after you've broken down each of the solution's consequences and scrutinized the outcomes thoroughly and have concluded that there is absolutely no problem with it (or something which you are in a capacity to deal with).