April 26, 2017
I once asked my friends. Given a choice between Snapchat, Instagram and Whatsapp, what would you uninstall ? Surprisingly, all three options got the same amount of votes. We are sooooooo attached to our apps, aren't we ?
Recently news came up that Snapchat's CEO had stated in a 2015 interview that he wasn't going to expand his Snapchat updates (the ones that all US people have but somehow is missing from India)  to India since it was a "poor country". Now Indians would say that it was stupid statement to make. All sorts of memes came out trolling Evan Speigel. But I don't blame him for his ignorance. Afterall how would he know that Indian rickshaw drivers and dhoodhwalas own Rs.15,000 phones (now I can go on this, but I know the internet is free and you have the best phone in the world so go check this out  What the Wuck Facts ) 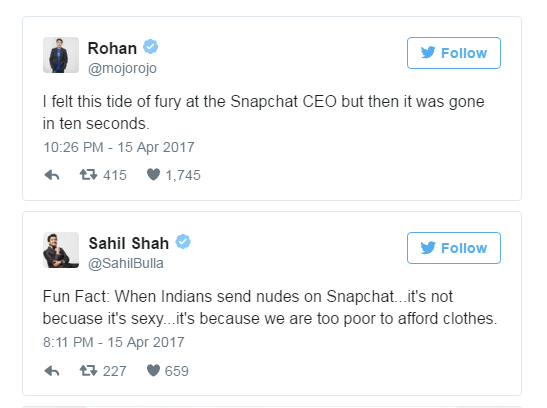 My Instagram and Snapchat feeds were filled with screenshots of his interview accompanied by #UninstallSnapchat. The part after that was quite hilarious. Apparently Spiegel saab was not as dumb as I thought he was.  All threats of #UninstallSnapchat were actually harmless. Everyone was back after 10 days. So we're cool.

Moral of the story : You say something about India and you've had it ( we are fiercely patriotic - even if we struggle to make it for Independence Day Flag Hoisting). And you won't know what hit you.

But you say it with Social Media, all you'll get will be memes and trolls. That's called TALENT.