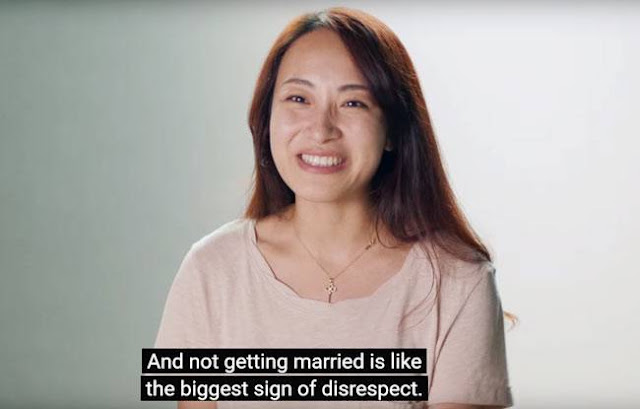 Sheng Nu is a derogatory term made popular by the All-China Women's Federation that classifies women who remain unmarried in their late twenties and beyond. The slang term, 3S or 3S Women, meaning "single, seventies (1970s), and stuck" has also been used in place of Sheng Nu.

Here is an excerpt from an article written by a Chinese lady on what it feels like to be unmarried at 30.

"As I turn 30, I am left wondering what it means to be a Chinese woman - and a well educated one at that - entering her fourth decade. One thing is for sure: if like me, you’re unmarried at 30, your life “is over”.
No surprises there, given more than 90 per cent of women marry before 30 in China. Single at 27 and you’re a “leftover woman”; single at 30 – well, you're as good as dead.
A woman's early twenties in China are considered her most attractive. It’s also when a woman is most “tender”.

Just last month, after a minor disagreement with my father, he tossed out this charming line: "Looks like women who are over a certain age and unmarried develop temper issues". But however shocking this might seem, it's just the tip of the iceberg compared to what other women go through.

What I should enjoy at nearly 30 is the ability to say what I want - without being called too ambitious, too manly or too idealistic. I want to enjoy going to a wedding without hearing "and when will you be getting married?”.

Maybe I will marry soon; maybe I won't. But one thing's for certain - we Chinese women have a long way to go before we arrive at where we wish we could be. "
Being a 19 year old who has still got 3 more years to complete her education, I'm somewhat thankful that I'm Indian and not Chinese. Yes, it is a bit difficult to get married in India once you cross 30; but fortunately we do not have a derogratory term such as "leftover women" (although there is desi term called "kunwari" which is a compliment when you're young, but turns into a taunt when you cross a certain age).

Borderline story - Life is not a cakewalk. And the things that make life tough are not circumstances but rather people who have nothing better to do in life other than judge you for your actions.