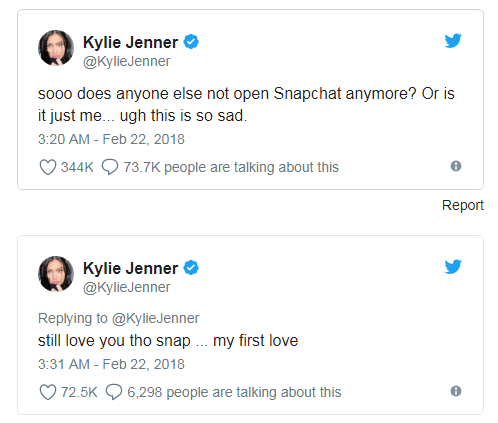 I personally don't like Snapchat's newest update. Just when I started making streaks with everyone, Snapchat came and decided to get a makeover. The entire app has become annoying now. I'm just waiting for a reverse update. Come to think of it, I like my apps to be the way they are. Whatsapp's emojis also freak me out at times. They seem too real. Instagram changed it's logo and I went from Whaaaaaat ? to What ? But no harm done there.

But there is one person who has the power (maybe unknowingly) to change Snapchat's share prices.
Reality TV star Kylie Jenner wiped $1.3bn (£1bn) off Snap's stock market value after tweeting that she no longer used its Snapchat messaging app.

Celebrity Kim Kardashian's half-sister posted: "sooo does anyone else not open Snapchat anymore? Or is it just me... ugh this is so sad."
Snap's shares sank after Ms Jenner's tweet about Snapchat's re-design to her 24.5 million Twitter followers.
One million people signed a petition demanding Snap roll back the change.
After dropping almost 8%, shares in Snap closed 6% down on Wall Street, and are now back near the $17 price at which the shares were listed when the company floated on the stock market in March of last year. 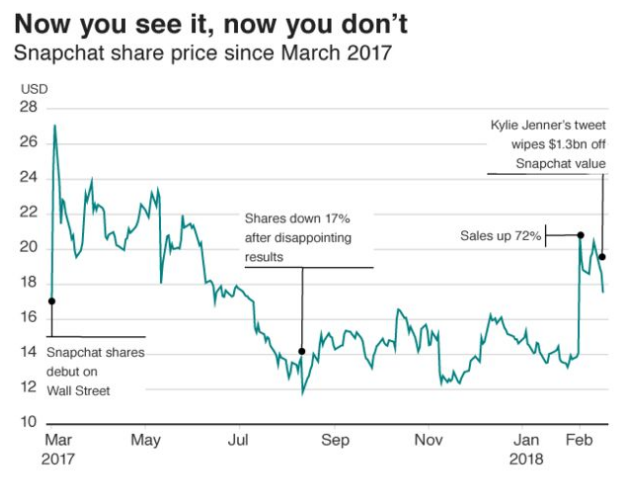