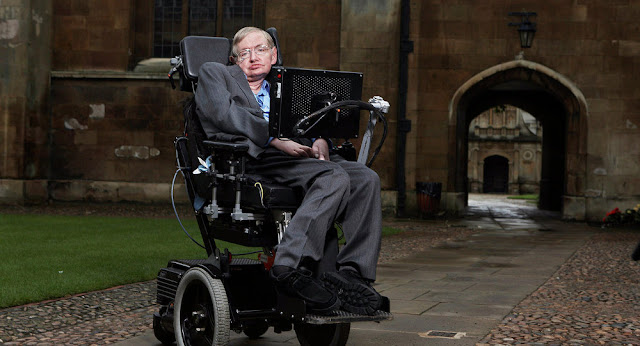 The Cambridge University physicist and best-selling author who roamed the cosmos from a wheelchair, pondering the nature of gravity and the origin of the universe and becoming an emblem of human determination and curiosity, died early Wednesday at his home in Cambridge, England. He was 76.

I wish I could write this well, but I'm really not that into Physics. I was however, until a few years ago, very interested in the life of Stephen Hawking. He was diagnosed with an incurable disease in his 20s, with his doctors giving him a maximum of 3 years to live. This man however, proved everyone wrong (obviously) and lived uptil 76! Not only that, he also contributed to the field of physics in a million ways (you can check how on the internet....there are tons on sites on that topic).

While I may not be a fan of his work (I'm a Business Management student, and physics has always been one of my lesser liked subjects), I definitely admire him for his persistence, patience(because I suffer from the lack of it) and moreover his determination, infatuation (Where did the universe come from??) and dedication to his research and books. It takes one hell of a willpower to be able to do all these things from a wheelchair where people can hardly understand what you're saying and yet be able to sell more than 10 million copies worldwide (A Brief History of Time) and capture the hearts of millions of people along with it.

The world has lost a star, leaving a void that will be hard to fill. He was and will always be a shining star in the field of physics, remembered by all.